In this work we present and initially evaluate, both in-vitro and in-vivo, a high frame rate (HFR) CE imaging system using diverging waves and pulse inversion sequence. An imaging frame rate of 5500 frames per second before and 250 frames per second after compounding is achieved. A destruction-replenishment sequence has also been developed. The developed HFR CE is compared with standard CE in-vitro on a phantom and then in-vivo on a sheep heart.

The image signal to noise ratio, contrast between the myocardium and the chamber are evaluated. Results show up to 13.4 dB improvement in contrast for HFR CE over standard CE when compared at the same display frame-rate even when the average spatial acoustic pressure in HFR CE is 36% lower than the standard CE. It is also found that when coherent compounding is used the HFR CE image intensity can be significantly modulated by the flow motion in the chamber.

(Left) CE, (Middle) HFR CE and (Right) HFR CE SUM 7 videos of in-vivo heart sheep experiments. SUM 7 corresponds to the averaging of 7 envelope detected HFR CE frames, with a triangular window centered on the interested frame. CE and HFR CE are two successive acquisition at the same position. All videos are normalized and log compress by their own maximum and display with a dynamic range of 40 dB. The maximum depth is 90 mm. and the lateral axis cover 100 mm. 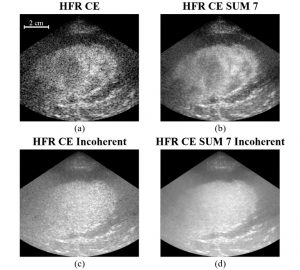 Figure shows HFR coherent (a, b) and incoherent (c, d) compounding and without and with temporal average of 7 consecutives frames in (a, c) and (b, d), respectively. All images are displayed with a 40 dB dynamic range. As expected, incoherent compounding removed the motion artefacts inside the chamber because phase information is lost, and so, small misalignment between echoes from each steered transmission does not significantly impact the image. However the image dynamic range and contrast are significant reduced, and some fine details inside the myocardium disappears.

This work was supported by an Engineering and Physical Sciences Research Council (EPSRC) grant EP/M011933/1 and grant EP/M010961/1.