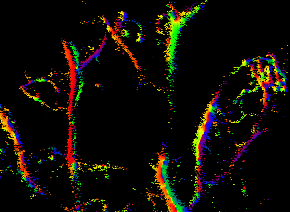 The spatial resolution of any imaging modality based on waves (Electro-magnetic or mechanical) is fundamentally limited by the size of its wave length (diffraction-limited image resolution). Recently such diffraction limit has been broken in the field of optical microscopy, by the so-called “super-resolved fluorescence microscopy” which was awarded the 2014 Novel Prize in Chemistry.

We are working on the ultrasound counterpart of this super resolution imaging, by developing techniques to detect and pin-point individual microbubble contrast agents within micro-vasculature. We have generated both in vitro and in vivo images of image resolution far below the diffraction limit[1, 2].

We are working to further improve the technique and apply this to a wide range of in vivo applications including cancer. This is a collaboration with Dr R Eckersley (KCL) and Dr C Dunsby (Imperial).