You are here: Home  /  Featured Publications  /  In vivo 3D Super-Resolution of Rabbit Lymph 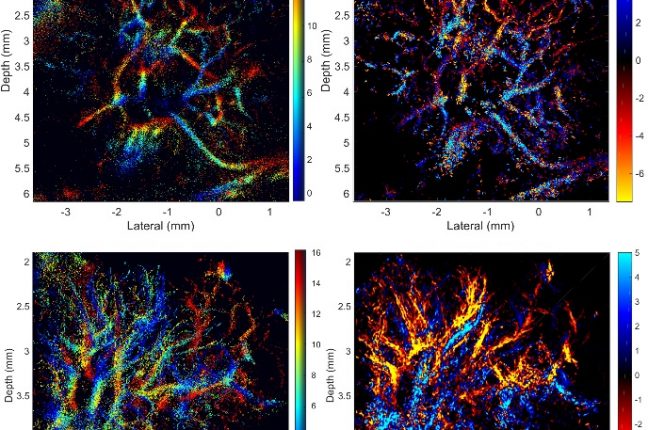 B. Clark is with the Department of Imaging, Natural History Museum, London, U.K.

C. Dunsby is with the Department of Physics and the Centre for Pathology, Imperial College London, London, SW7 2AZ, U.K.

Variations in lymph node (LN) microcirculation can be indicative of metastasis. The identification and quantification of metastatic LNs remain essential for prognosis and treatment planning, but a reliable noninvasive imaging technique is lacking. Three-dimensional super-resolution (SR) US has shown potential to noninvasively visualize microvascular networks in vivo.

To study the feasibility of three-dimensional SR US imaging of rabbit LN microvascular structure and blood flow by using microbubbles.

SR images revealed microvessels in the rabbit LN, with branches clearly resolved when separated by 30 µm, which is less than half of the acoustic wavelength and not resolvable by using power or color Doppler. The apparent size distribution of most vessels in the SR images was below 80 µm and agrees with micro-CT data, whereas most of those detected with Doppler techniques were larger than 80 µm in the images. The blood flow velocity distribution indicated that most of the blood flow in rabbit popliteal LN was at velocities lower than 5 mm/sec.

Three-dimensional super-resolution US imaging using microbubbles allows noninvasive nonionizing visualization and quantification of lymph node microvascular structures and blood flow dynamics with resolution below the wave diffraction limit. This technology has potential for studying the physiologic functions of the lymph system and for clinical detection of lymph node metastasis.